by Sistersr@@m001
7 years ago
Uncategorized
No comments
2318 Views 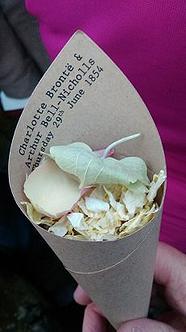 On Friday, 11th December the BBC re-enacted Charlotte Brontё’s wedding for a documentary that will be shown in 2016. The ceremony was filmed inside St Michael and All Angels church while a group of Brontё enthusiasts was waiting in the churchyard for the newlywed couple to come out. We weren’t there unfortunately, but our friend Nick Holland (writer and author of the amazing Brontё website Anne Brontё- Love, Loss and Redemption ), was there and sent us these pictures and this personal account of the event.
Many thanks for sharing such an extraordinary experience with us Nick!

“I always feel privileged to live in Yorkshire, and within easy commuting distance of Haworth – the home of the sisters we all love so much. I often attend Brontë events in the village, but few have been as enjoyable as the one I went to last Friday – a re-enactment of Charlotte Brontë’s wedding to Arthur Bell Nicholls in June 1854 that was being filmed for a BBC documentary to be shown next year.
We were told to be waiting outside St Michael and All Angels church at 2.30, and I used the hours before then to explore the beautiful shops and cafés that Haworth has to offer, as I’ve done many times before. By 2.30 a small and dedicated group of Brontë enthusiasts were gathered outside the church, but a BBC assistant told us that things were running behind schedule, and as it was very cold and had started to rain she asked us to come back in half an hour. Never mind – we all know how wedding days never go according to plan!
It was certainly a wuthering day, as we say in Yorkshire, with an icy wind blowing off the moors. I warmed myself up with a quick pint in the Black Bull Inn next door, something that I’m sure Branwell  Brontë if not Charlotte would have approved of.

I arrived back at the church just before 3, and by now the crowd had grown a little (there was even a dog or two in attendance) and the rain had stopped. The production assistant handed us all cardboard cones filled with rose petals, and told us all to smile and pretend we were warm – the wedding was in June after all!

The cameramen took their positions, the church doors opened, and we got our first glimpse of Charlotte and her new husband Arthur! Well done to the BBC, the actress playing Charlotte, Sophie Trott, was just as I imagined Charlotte to be on her wedding day – very tiny yet happy and radiant. The crowd cheered and we threw our rose petals. Charlotte and Arthur kissed and we cheered some more. They had to film this scene again (one onlooker remarked: ‘All that kissing they have to do, and they get paid for it as well!’), and then we all got the opportunity to take pictures of Charlotte, Arthur and their wedding party including Miss Wooler and Ellen Nussey.

All in all, it was a wonderful if very cold day, full of laughter and jollity – and I found it strangely moving as well. Even though everyone, myself included, had their mobile phones aloft we were transported back for a moment to that day 161 years before. It was impossible not to think forward a few months to what awaited Charlotte. With typical Yorkshire bluntness and common sense, another onlooker called out as Charlotte kissed her Arthur again, ‘That’s it Charlotte – give him a good kiss, after all you haven’t got long left!’”