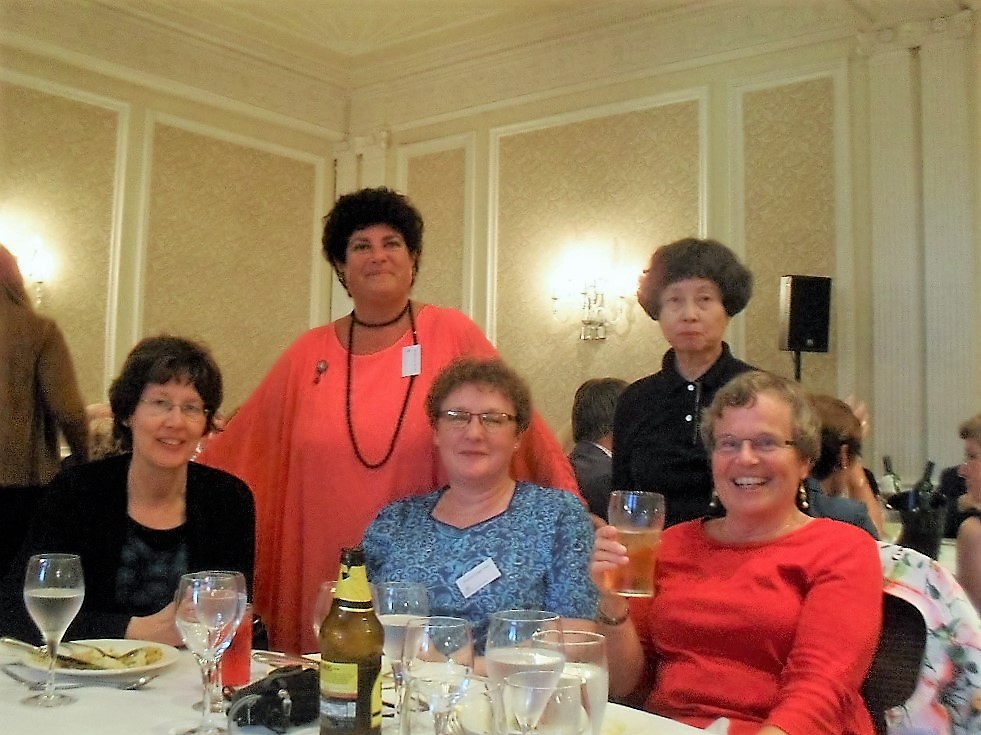 On 19–21 August,, the latest Brontë Society biennial conference took place at the exclusive Midland Hotel in Manchester, where the bicentenary of Charlotte Brontë’s birth was celebrated. A small delegation of the Brontë Society in Italy took part in the event: the representative Maddalena de Leo, and professor Caterina Lerro.

The title of these three days conference entirely dedicated to Charlotte was “… the business of a woman’s life…”, Charlotte Brontë and the Woman Question”. Among the many scholars

who took their turns on the microphone we can mention: Christine Alexander from Australia, specialist in the study and transcription of Charlotte Brontë’s juvenilia; the Australian Germaine Greer, renown supporter of Feminism in the 1900s; Sally Shuttleworth, famous scholar in Victorian literature; and besides them, many other Brontë experts from many different countries.

On Friday afternoon, after the splendid welcome we received at the magnificent Midland Hotel, about one hundred and fifty guests from around the world, had the chance to be introduced to the conference by Christine Alexander, who spoke about young Charlotte’s literary ambitions, also mentioning the newly recovered book that belonged to Maria Branwell, and which has been recently acquired by the Brontë Society. After the introduction, Alexander presented her new awe-inspiring book, written in collaboration with Sarah Pearson Celebrating Charlotte Brontë : Transforming Life into Literature in Jane Eyre, which features as the principal BS publication in 2016, for Charlotte Brontë ‘s bicentenary. After a toast offered by the editors of the Brontë Studies, the first dinner took place in the extremely elegant Derby Suite at the first floor of the hotel, next to the conference room, and after dinner Helen Mc Ewan, representative of the Brontë Society in Belgium, delivered a brilliant speech on how Belgian people used to look at Charlotte Brontë in the first half of the nineteenth century.

On Saturday, 20th August, the key-note speaker Germaine Geer hold a very personal and original conference rich in inputs and notions on Charlotte’s mundane life, a topic that raised lots of questions and gave life to a very engaging discussion in the conference room. After that, the guests enjoyed a visual presentation of most of the dramatic film versions of Charlotte’s novels.

After a lunch break, in the afternoon, some of the guests went to the Manchester Central Library while the others took part in the excursion previously organized by the BS, which included a visit to the recently restored house where Elizabeth Gaskell lived, in 84 Plymouth Grove. Charlotte Brontë ‘s biographer lived there from 1850 until her death, in 1865. In that very house she wrote all her novels and the Life of Charlotte Brontë . Charlotte was a guest in the sitting room of that very house for at least three times, During the last period of her life.

Back to the Midland Hotel, after more lectures on the female role in the Victorian Era, the most important moment of the Conference eventually came: the gala dinner, with a sophisticated menu of salmon. After dinner, the guests could listen to Claire Harman, Charlotte’s latest biographer, delineating the strengths as well as the weaknesses of Charlotte’s friendship with Mary Taylor and Ellen Nussey.

The last morning of the Conference, after a lecture by professor Shuttelworth about the sense of injustice in childhood, denounced in Jane Eyre and in other novels by Charlotte, was dedicated to the economical aspect of the “woman question” in the Victorian Era. After the final lunch, Patsy Stoneman, vice-president of the BS, was thanked for the impeccable organization of the event, and all the scholars who take part in the conference were greeted.