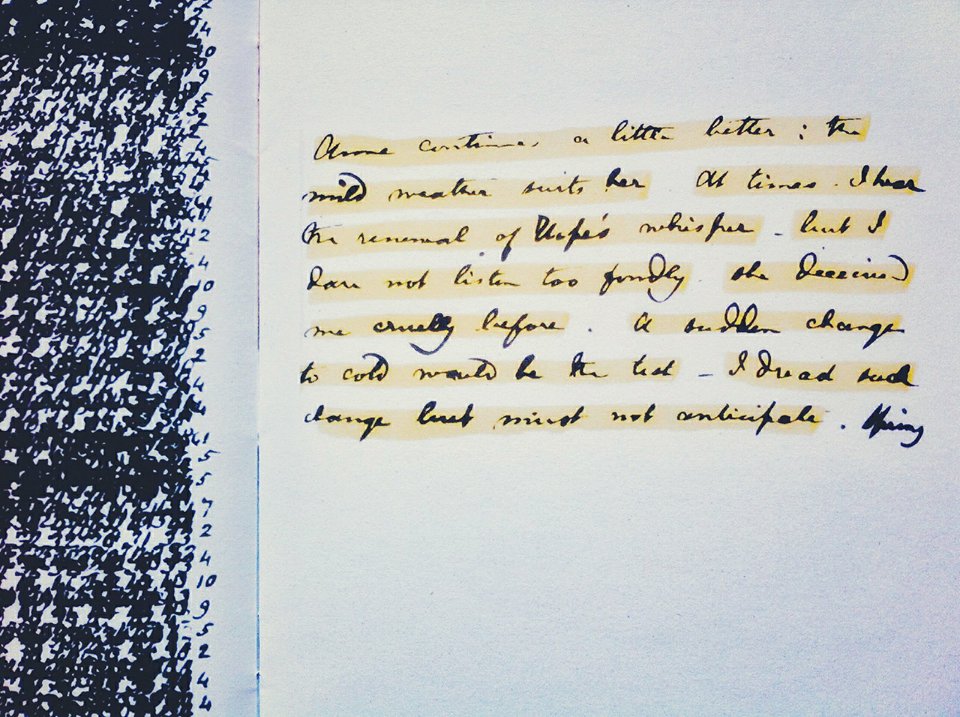 The Sisters’ Room is very happy and glad to present a new collaboration! As a matter of fact, our blog is working with Elena Lago’s Art Plug&Play,  a contemporary art blog. Elena Lago is a very young and smart art historian who diveloped a digital extension of her amazing bachelor’s thesis by creating this blog, where she deals with interactive, shared art. So, how these two blogs, one dedicated to the Brontës and the other one dedicated to art, are going to work together? Well, it’s easy- by connected the two themes! We want to start this collaboration by telling you about  Rebecca Chesney‘s amazing project. In her Brontë Weather Project his British artist put together literature, art and… the weather! Our collaboration will consist of three steps- an article by Elena Lago focused on the artistic features of the project; a double interview to Rebecca Chesney with both artistic and literary questions about the project; and finally an article by The Sisters’ Room focused on the literary aspects of the project.
Well, if you want to know more just read this first article- we are pretty sure this project will surprise you!

Rain, Wind and Sunshine Between the Pages of the Brontë Sisters

It’s always thrilling to find out how often reality and literary fiction just perfectly dovetail- sometimes they connect in such a perfect way that we can find a clear reference to our time and lifestyles in the pages of books. In 2011 the British artist Rebecca Chesney, whose job deals with the human perception of both natural environment and time, started a project which inextricably intertwined art, nature and literature.

in 2008- as a matter of fact, while reading the novel the artist realised how much it was rich in weather references and, at the same time, how deeply these latter influenced both the narrative and the characters. So she wrote down all the weather quotes she found in the text, and afterwards she did the same with Wuthering Heights and The Tenant of Wildfell Hall, respectively Emily’s and Anne’s novels.

Snow, wind, rain, sunshine and fog are very important elements in these novels, which always highlight the powerful atmosphere of the lands where they are settled. So, with this very careful attention to the weather in the novels, Chesney created the The Brontë Weather Project, a year long research at the Brontë Parsonage Museum, Haworth, Yorkshire- the very home of the Brontë siblings. Chesney’s approaches to the environment and to the museum were of different kinds- on the 12 October 2011 she sited a digital weather station in the garden of the museum, and started collecting weather datas for about a year (until November 6, 2012, when she removed the digital weather station from the museum).

Later on she compared the datas she collected from the three novels to better understand how the climate of the windy moors influenced the lives of the three sisters and their works. At the same time she tried to find out how much, still today, the people living in Haworth and in the surrounding area are influenced by the moors and the cold winds blowing there. Once she collected all the weather datas from the novels, she developed eighteen categories of atmospheric agents, translated into three colour wheels– one for each sister. Analyzing these colour wheels, Chesney realised that each sister could be identified with a specific atmospheric agent, on the basis of how often (in percentage) she mentioned that agent in her text: it turned out that Emily is the wind, Charlotte is the rain, and Anne is the sunshine.

Therefore Chesney created a very special sculpture, that she put in the garden of the Parsonage as well: it’s a mechanism formed by metal pipes, a wheel and three bells– a clear reference to the pseudonyms the three sisters used to publish their works: Ellis, Currer and Acton Bell. The three bells ring whenever the wind blows a lot, or there is a certain amount of rain, or when the sunshine is detected by the mechanism.

But this is just the beginning- as a matter of fact the whole project is rich in lots of starting points and references which connect the past to the present: while working at her project, in fact, the artist created a blog. Chesney would write down notes and experiences during the different phases, posting photos of the Yorkshire skies, and exactly like a modern Constable she would write date and time on each photo. She also wrote down personal experiences, and excerpts from the novels in which specific weather quotes could be found and that would perfectly match with the weather of a given day in 2012.

In other words, she created a sort of digital diary which helped to clarify how deeply and completely Chesney felt connected with the Brontës, and tried to interpret their lives through their written testimonies of both time and weather. But it was mostly possible to compare the Nineteenth Century climate and the current climate thanks to the involvement of some volounteers from Haworth, Ponden and Stanbury. This added an engaging new value to the project, as the people from Yorkshire were able to take part direcly in a project entirely related to climate in the area where they live.

Chesney gave each volounteer a kit to “measure” the weather- a pretty box containing a digital thermometer, a pen, a pencil, and different cards. Each volounteer had to write down his/her name, place, date, time, temperature and climate datas, as well as their own feelings and opinions. Record collecting started on Tuesday 18 October 2011 and ran until Monday 5 November 2012, for a total of 2334 hand-written cards. This way the artist was able to compare and connect the datas from the station, those from the sisters and those from the volounteers in a temporal teme that connects the past with the present. The result was amazing- five long diagrams on graph paper, comparing five weather quotes from the novels. 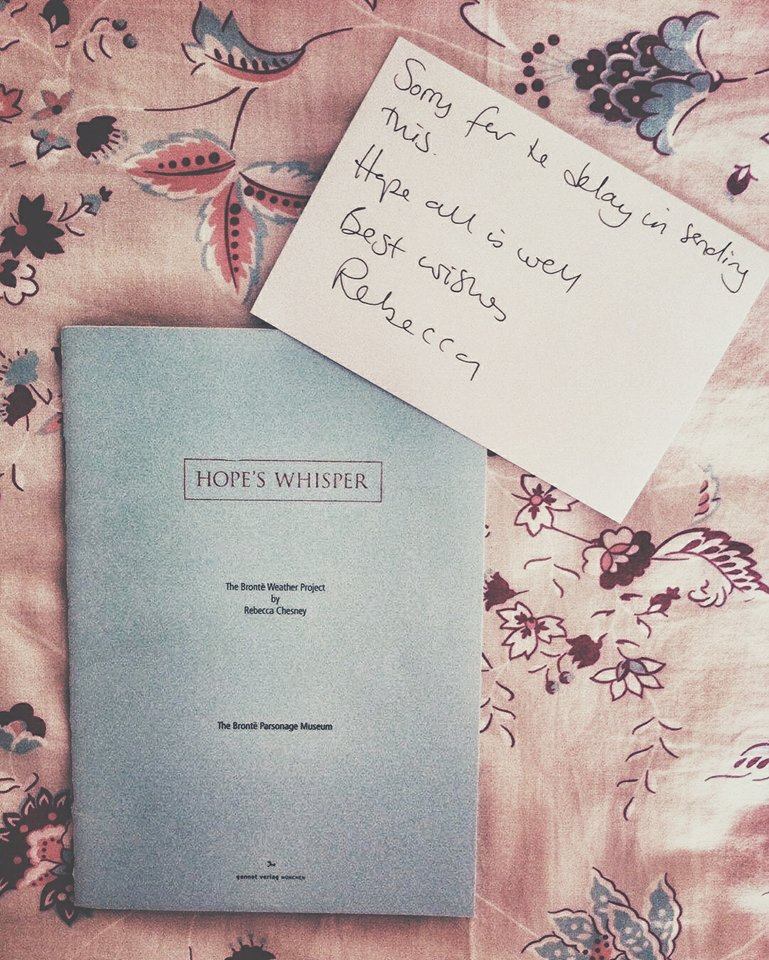 For example, in Wuthering Heights the sentence “dark night coming down prematurely, and sky and hills mingled in one bitter whirl of wind and suffocating snow” has been connected with the weather data collected at the museum on December16, 2011- both in that day and in Emily’s literary day in fact there was a very akin weather. The artist connected and compared dates, feelings, scientific elements and quotes, and created an amazing exhibit at the Parsonage- Hope’s whisper. She chose some words by one of Charlotte’s letters (February 4, 1849): «Anne continues a little better: the mild weather suits her. At times – I hear the renewal of Hope’s whisper – but I dare not listen too fondly – she deceived me cruelly before […]».

In this letter Charlotte talks about Anne’s poor health. Anne will die a few months after that letter, but from Charlotte’s words we can see that while writing it, she was hoping the change of climate would do good to Anne. Hope’s whisper is the name of the exhibit, and it underlines how deep the weather influenced the lives of the sisters, even and mostly when they were ill. As a matter of fact Chesney also studied some Nineteenth Century texts in which a connection between poor weather (damp, rainy, snowy weather) in Yorkshire and some illnesses such as tubercolosis could be found. She consulted the 1850 Babbage’s report, which connects the high death rate in Haworth with some heavy rains in the 1840s; but she also read Abraham Shackelton of Braithwait’s “weather” diaries containing daily weather reports from 1800 to 1857.

All the Brontë siblings died between 1848 and 1855, that’s the reason why many academics connected the high death rate of those years with very bad weather conditions, which helped spreading some illnesses difficult to cure, such as tubercolosis. Chesney used copies of Abraham Shackleton’s diary pages to point out days, weeks and months which lead to the death of each sister. Later on, thanks to silk- screen printing, she superimposed these dates so many times and created a confused cloud of black ink and numbers, so thick that it’s impossible to read.

So, while the colour wheels represent the sisters’ wild imagination and their many-sided creativity, as colorful as they were in life, the dark prints describe the sad days that brought them to death and the end of their activity as writers- something precious that lasts forever and that we can still find in their gorgeous novels.