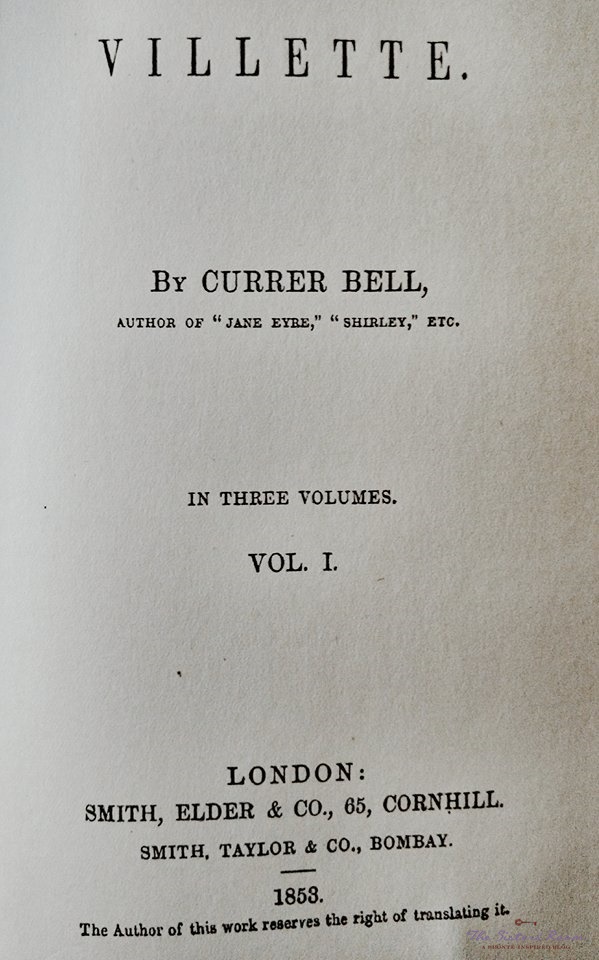 Pin it
Our adventure on the Net starts in Charlotte Brontё’s room, where we’ll talk about Villette, the last Brontё novel we read. That’s how the novel was welcomed by the reviewer of the The Literary Gazette after its publishing, in January 1853: “This book would have made her famous, had she not been so already. It retrieves all the ground she lost in Shirley, and it will engage a wider circle of admirers than Jane Eyre, for it has all the best qualities of that remarkable book, untarnished, or but slightly so, by its defects.”

At the time when Charlotte wrote Villette, she had lost her three last surviving siblings and, just like the protagonist of the novel, Lucy Snowe, Charlotte survived “a long time of cold, of danger, of contention”. “For many days and nights neither sun nor stars appeared; we cast with our own hands the tackling out of the ship; a heavy tempest lay on us; all hope that we should be saved was taken away. In fine, the ship was lost, the crew perished.”; this is how the author describes the mysterious event that suddenly wrecks Lucy Snowe’s life. Tempest and shipwrecking are strong images that occur in crucial moments, when the life of the protagonist is going to face an important change. The roar of the storm is a metaphor of death, and strengthens our perception of the unbearable silence that follows each loss. The same silence that Charlotte was probably experiencing in those sad days at the Parsonage.

Charlotte doesn’t want to linger on suffering, and uses metaphors to hide and protect that misery with discretion. Even though the publisher George Smith had asked her to write a bit more about the reasons that lead Lucy Snowe to leave her old life behind, she was determined not to write a word more on the subject because she probably didn’t want to disclose her own pain. Maybe, that’s the reason why Charlotte asked to be published anonymously, a request that couldn’t be accepted because of the great success she had already achieved under the penname Currer Bell.

Villette is a book that every Brontё enthusiast should read. The emotions that transpire from the novel are genuine, powerful and intense. Lucy Sonwe’s life, places and time, belong to the protagonist as much as they belong to Charlotte Brontё herself.

Peeking Through the Keyhole: Curiosities

– Fazi Editore has recently published Villette with its original title, but there are other former Italian editions of the novel named Collegio femminile (Rizzoli, 1962); L’angelo della tempesta (Frassinelli, 1997); Miss Lucy (Capitol, 1960). Though there are many dramatizations of other works by the Brontë sisters, there is no such a thing for Villette.

– Apparently, in 1970, BBC produced a miniseries composed by 5 episodes of 45 minutes each, directed by Moira Armstrong and written by Lennox Phillips. Unfortunately it’s not available anymore and there is no way to find it.

How about you, have you read Villette? Do you want to know more about the places that inspired Charlotte’s most intense novel? If so, you can’t miss our travel blog posts: View From The Window: In The Footsteps Of Charlotte In Brussels, View From the Window: The Brontës in Brussels.