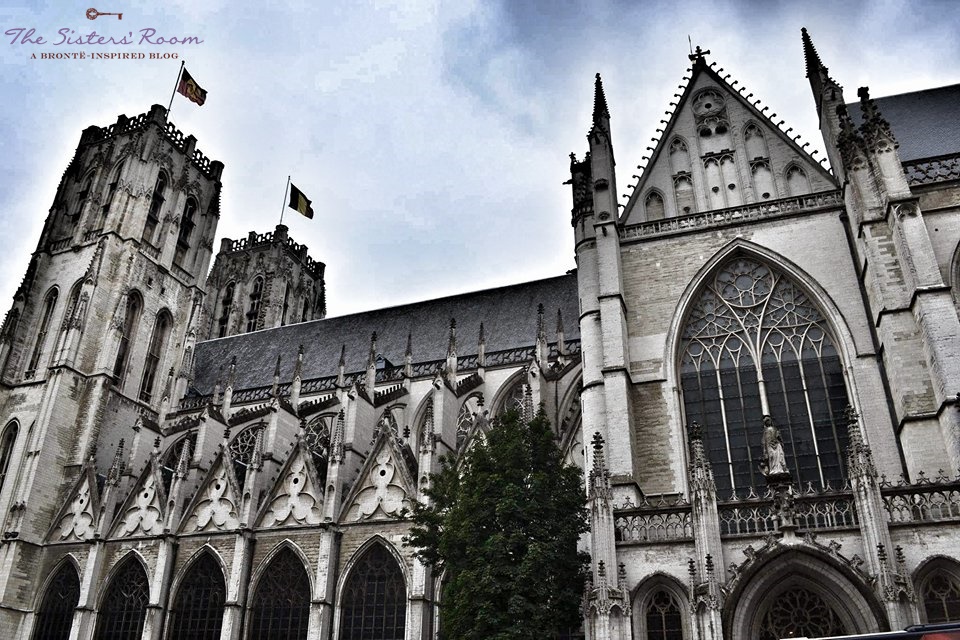 To celebrate the long awaited bicentenary of Charlotte’s birth, The Sisters’ Room wants to pay homage to this writer with an article about one of the most intense moments of our adventure in the footsteps of the Brontës. Last year we travelled to Belgium and stopped in Brussels. In that very city, Charlotte and Emily spent some months of their lives in order to study foreign languages- in fact, the two sisters had a project: they wanted to open their own school.

In Villette, one of her deepest and most intense novels, Charlotte writes a lot about this period spent in Brussels- as a matter of fact, the author builds the small, Francophone, Catholic city in which Lucy Snowe’s adventure takes place on Brussels itself. The pages of Villette hide lots of information about Charlotte’s private life, about her loneliness, her fears, and the secret infatuation she got for a Catholic Professor older than her. Having recently read Villette, we couldn’t miss such an important Brontë landmark during the summer, and so, on a windy and rainy August afternoon, armed with maps, books and raincoats we went looking for the places where the Brontë sisters had lived, walked, and breathed long ago.
We were highly disappointed when we found out that that Ninetheenth Century Brussels was gone as well as the Pensionnat de Demoiselles Héger. But on the contrary, there actually was a place we were sure we would have found, still there, in spite of the time: the most important Catholic centre of Brussels, Saint Michael and Saint Gudula Cathedral.

This Gothic cathedral dedicated to the protector of Belgium stands, majestic, at the top of a monumental staircase. Charlotte Brontë describes it in a very touching paragraph of Villette

, where Lucy Snowe tells the reader about a quite peculiar episode that happened to her:

“That vacation! […] The house was left quite empty, […] My heart almost died within me; miserable longings strained its chords. How long were the September days! How silent, how lifeless! […] One evening – and I was not delirious: I was in my sane mind, I got up – I dressed myself, weak and shaking. The solitude and the stillness of the long dormitory could not be borne any longer; […] Covered with a cloak (I could not be delirious, for I had sense and recollection to put on warm clothing), forth I set. […] After a space, breathless and spent in prayer, a penitent approached the confessional. I watched. She whispered her avowal; her shrift was whispered back: she returned consoled. Another went, and another. A pale lady, kneeling near me, said in a low, kind voice – ‘Go you now, I am not quite prepared.’ Mechanically obedient, I rose and went.”

While reading these words in Villette, we realized that they were no surprise for us, and we immediately thought of a letter Charlotte wrote to Emily on the 2nd September 1843, from Brussels:

“DEAR E. J.,–Another opportunity of writing to you coming to pass, I shall improve it by scribbling a few lines. More than half the holidays are now past, and rather better than I expected. […] I go out and traverse the Boulevards and streets of Bruxelles sometimes for hours together. […] I found myself opposite to Ste. Gudule, and the bell, whose voice you know, began to toll for evening salut. I went in, quite alone (which procedure you will say is not much like me), wandered about the aisles where a few old women were saying their prayers, till vespers begun. I stayed till they were over. […] An odd whim came into my head. In a solitary part of the Cathedral six or seven people still remained kneeling by the confessionals. In two confessionals I saw a priest. […] I took a fancy to change myself into a Catholic and go and make a real confession to see what it was like.”

So on that day in Brussels, Charlotte Brontë as well as Lucy Snowe in Villette, experienced a Catholic confession, even if she was a firmly convinced Protestant; in her letter to Emily she adds: “Knowing me as you do, you will think this odd, but when people are by themselves they have singular fancies.” 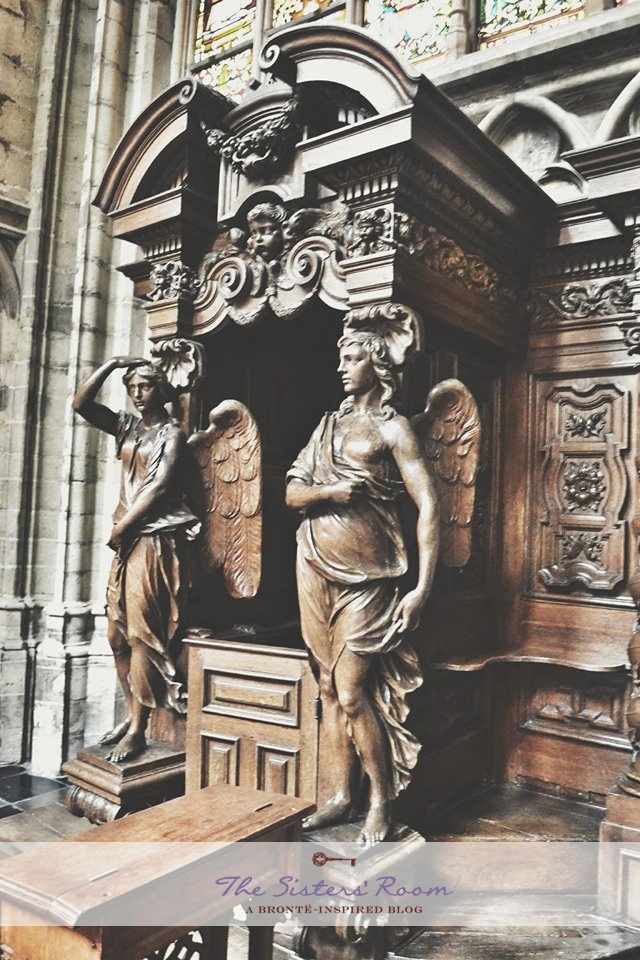 There are different theories about Charlotte’s decision to go to confession, such an impulsive decision so contrary to her principles, but the only certain thing we have got are the words of Lucy Snowe, who, after explaining to the priest that she was Protestant, justifies her choice like this: “I said I was perishing for a word of advice or an accent of comfort. I had been living for some weeks quite alone; I had been ill; I had a pressure of affliction on my mind of which it would hardly any longer endure the weight.”

So, on that very cold day towards the end of the summer, in Brussels, sheltering from the rain in Saint Gudula, we walked through long naves, looking for Charlotte’s traditional confessional. There was a warm light inside, and a sweet music surrounded us, and we felt calm and there was a peaceful atmosphere- maybe Charlotte felt just the same when she was there.
We sat on the benches just in front of the dark, wooden inlaid confessional, trying to picture Charlotte’s tiny figure, curious and surprised, while inspecting the small, dark window behind which the priest was. Being there was such a moving experience for us! Imagining that single event in Charlotte’s life, and being so close. Once inside the cathedral though, that peculiar episode that stroke our attention when we read about it in those letters didn’t seem so peculiar all at once… after all, it is true: “when people are by themselves they have singular fancies.”

Share:
Tags:
#belgium#Brussels#confession#confessional#Lucy Snowe#Saint Gudula#selene#travel#villettecharlotte bronte
View From The Window: In The Footsteps Of Charlotte In Brussels Score: 0 / 5 (0votes)