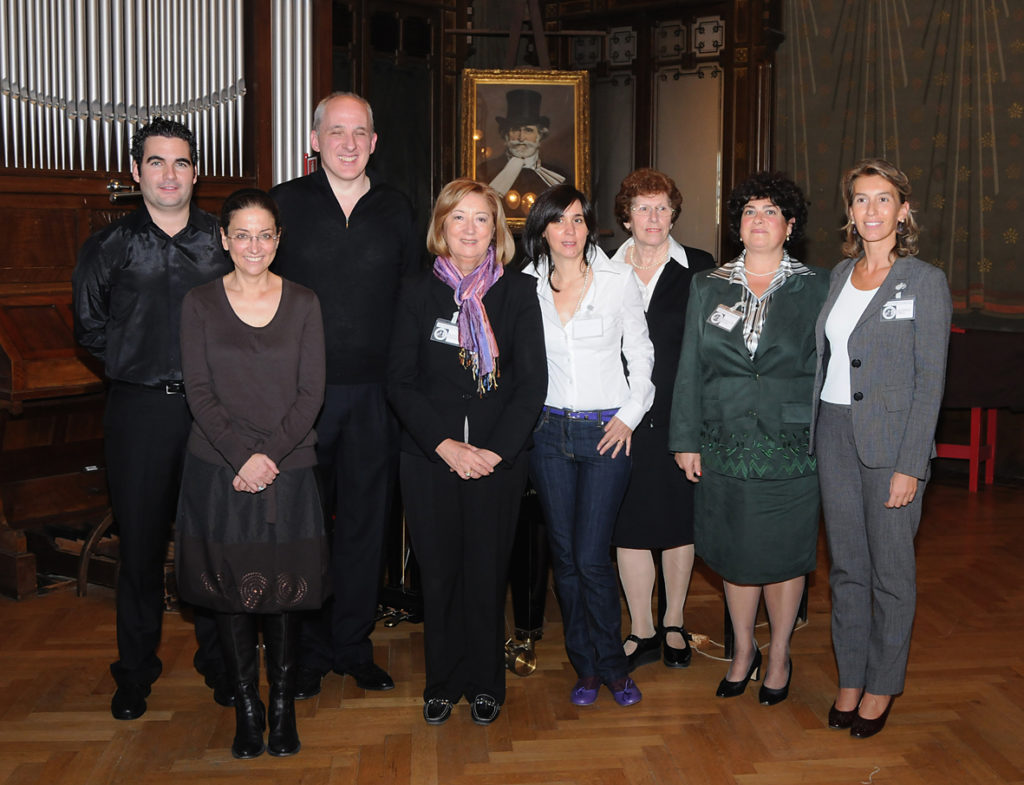 In this article we want to tell you, briefly, how and when the Brontë Society in Italy was born. This is an interesting story about a group of passionate Brontë-scholars who decided to start organizing meetings and cultural events entirely dedicated to the Brontës in Italy.

Everything started in November 1997, in Bologna, where Franca Gollini, first representative of the Brontë Society in Italy, Maddalena De Leo and Franca Musi met at The Legacy of the Brontës, a conference organized by the British Council in Bologna. Their deep passion brought them to create a section, in Italy, of the Brontë Society, and started to organize cultural events in order to popularize the Brontë world for an Italian audience.

A year later, in October 1998, at the British Council in Bologna, the Brontë Society in Italy met officially for the very first time. The supervisors for this first meeting were Cosetta Veronese and Maddalena De Leo, and the meeting focused on Emily’s poems and on the Brontë projects organized at school by Professor De Leo. In that very same year De Leo created ‘Il Notiziario dei Soci della BS Italiana’.

2001 was a very prolific year, rich in events: in January, at the British Council in Milan the meeting was about the presentation of the book Emily Brontë, ipotesi per un ritratto a colori by Nicoletta Gruppi, and, moreover, Emanuela Martini presented an interesting relation about the Brontë filmography. In April, in Florence, the scholars visited the house and tomb of Elizabeth Barrett Browning with Sister Julia Bolton Halloway, and the Italian translation of Mary Sinclair’s Le tre Brontë by Maria Del Sapio Garbero was presented.

Finally, in June, in Ascea Marina (SA) took place the national Brontë conference of Fondazione Alario. The main theme of the conference was “Landscape as a creative inspiration in Brontë works”. The supervisors were Maddalena De Leo, Caterina Lerro and Elisa Fierro, and during the meeting the audience saw and discussed the film “Wuthering Heights [DVD]

In 2002, the meeting took place at the Cambridge Insitute Centre in Modena, and the main guest was the British actress and BS member Angela Crow, while in 2003 the meeting was organized at the Keats-Shelley House in Rome, where Maddalena De Leo introduced her new translation of Stancliffe Hotel e altri racconti giovanili by Charlotte Brontë.

Very much awaited and appreciated was the meeting of 2004, at the British Council in Naples, in which the famous Australian Brontё schoolar Christine Alexander took part with her lecture entitled “Jane Eyre and paintings”, on Charlotte Brontё’s drawing and painting skills.

In 2005 the meeting was organized at the British Council in Milan, and was entirely dedicated to the publishing of the book All’hotel Stancliffe e altri racconti giovanili. In that same year, the ‘Brontë Magazine’ replaced “Il Notiziario”, curated by the BS member Raffaella Pazzaia.

In 2008 the Brontё Society in Italy flew abroad, for a surprise meeting directed and organized by Maddalena De Leo in Amsterdam, at the Crystal Hotel. Helen Mc Ewan, representative of the Bronte Society in Belgium, and the band Anois with Veronica Metz– author of songs inspired by Emiy Brontё’s poems- took part in the event, and many BS members from Belgium and Holland attended the conference.

In October of that same year, at the Giuseppe Verdi Rest Home for Artists in Milan, a new meeting of the BS in Italy took place, and De Leo delivered a lecture on the relationship between music and the Brontё family, which was followed by the musical performance of the Gondal Trio (Paolo Mencarelli, a BS member was among them).

Finally, in 2009, at the British Council in Milan, a new meeting was centered on the launch of the book Henry Hastings, cured and translated by Maddalena de Leo. Giuseppe Gambini for Albus Publishing attended the meeting and read a few pages of the new edition. After 2010, Silvio Raffo organized a few more meetings at the British Council in Milan. From 2010 to 2015 the events organized by the BS in Italy were occasional but since 2015 new initiatives were organized and a new adventure on the Internet started, also thanks to Maddalena De Leo, the new representative of the BS in Italy.