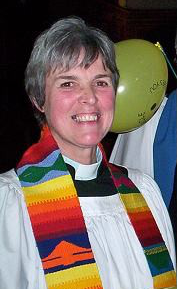 During my stay in Haworth in 2007 I had the chance to spend some time and have a little chat with a very special person- the vicar of the lovely and often crowded St. Michael and All Angels, the church where the whole Brontë family is buried except for Anne, who rests in Scarborough.

At that time Haworth’s vicar was Jenny Savage, a thin, tall woman with white hair; she was very efficient in her clerical tasks and her nice husband was helping her very actively.

On Sunday 8th July, after the evening Mass – during which we enjoyed a musical performance by a choir from a bordering town – there was a party. It was on that occasion that Jenny and I exchanged a few words:

At that poin I said good bye to my interlocutor, who was strongly claimed and invited by her parishioners to enjoy the party.