by Sistersr@@m001
4 years ago
Uncategorized
No comments
687 Views 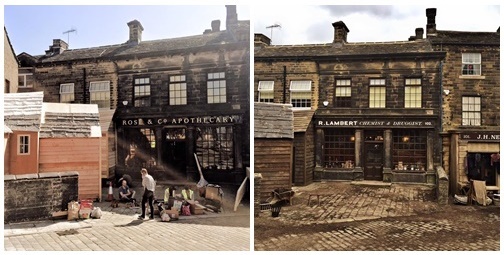 It seems like everybody’s talking about it, and on social networks we can easily find the first pictures from the set of To Walk Invisible: The Brontë Sisters, but what is it about? Well, if you love English Literature, if you are Brontë enthusiasts, if you still re-read Jane Eyre and Wuthering Heights, we’ve got some good news for you! In fact, there’s a huge special gift coming soon for us- BBC is producing a one-off drama, all about the lives of our favourite sisters.
Filming of the drama started last May and everything will take place in and around Yorkshire. Some online articles show pictures and short videos of the filming in York. But the most interesting part for us is the job BBC is doing in Haworth and surroundings, and we are following everything on Instagram and Twitter. The 1840s replica, of the Brontë Parsonage on Penistone Hill is amazing!

Entirely re-created in timber and MDF, and then painted, the building seems to be built from stone and it’s the exact replica of the original. Haworth Main Street itself has been dragged back in time, and some well-known local shops like Rose &Co. Apothecary and And Chocolate have been impressively turned into old small stores.

Moreover, costumes were replicas of the very clothes worn by the Brontë family, as well as the letters, the manuscripts and the personal objects used in the film. Authenticity is key to the set and the show itself, that’s the reason why BBC is collaborating with both the Brontë Society and Parsonage Museum.

Writer and director Sally Wainwright (Happy Valley and Last Tango In Halifax), together with the producer Karen Lewis and the executive producer Faith Penhale, are working to make everything very realistic. These are some of the actors in the cast: Jonathan Pryce (Wolf Hall, Game Of Thrones) will be reverend Brontë, Finn Atkins (Vera, Common) will play Charlotte, Chloe Pirrie (An Inspector Calls, War & Peace) Emily, Charlie Murphy (The Last Kingdom, Happy Valley) Anne, and Adam Nagaitis (Banished, Happy Valley) will be Branwell. These are the main characters, but there will be lots more, like Tabitha, George Smith, Enoch Thomas, respectively played by June Watson, Luke Newberry and Jamie Dorrington. BBC tv drama is due to be broadcast in December 2016. I’s a perfect Christmas present and we can’t wait to find it under our Christmas tree!