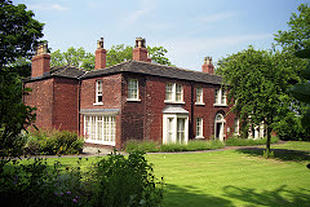 Pin it
On Saturday, 21st November 2015 we organized a new Brontё event at the lovely bookshop Tra Le Righe, in Rome. It was entirely dedicated to Charlotte and to the new Italian edition of Shirley  by Fazi Editore, and became a special opportunity to meet personally Brontё readers and enthusiasts. Also on this occasion, Professor Maddalena de Leo, representative of the Brontё society in Italy, took part in the event by sending us an interesting article to share with the audience, enriching the meeting with her vast knowledge of Charlotte’s life and works. We’re now posting the article on our blog with great pleasure, it is all about the real places that inspired Charlotte Brontё, and the impact they have on the many enthusiasts who go there.

VISITING THE PLACES OF SHIRLEY

During the summer of 2009 I finally succeeded in visiting the Red House and Oakwell Hall, the two rich houses accurately described in Shirley by Charlotte Brontë. I just used the expression “finally”, because these two impressive buildings are in Spen Valley, an area not served by public transport and therefore difficult to reach, even if it’s just twenty miles away from Haworth. Since the only way to get there is by car, it took a long time for me to be “finally” able to get there.

The ‘Red House’, built in 1660, takes its name from the unusual red bricks used to build it. It’s in Gomersal and it was the house of one of Charlotte’s closest friends- Mary Taylor. As a matter of fact, Charlotte herself was often invited here as a guest from 1830. In Shirley, the Red House becomes ‘Briarmains’, and the Taylors themselves, rich mercers for years, become the Yorkes.

In chapter IX Charlotte talks about some elements of the house that must have struck her attention during her visits there. As a matter of fact, she describes some decorated and colored glass windows in the living room, depicting Shakespeare’s and Milton’s faces. Moreover, she also describes a painting- a night eruption of the Vesuvio. Today it is possible to admire this elegant house recently turned into a museum by the Kirklees Trust, and which won the Standford Prize in 2005.

The Red House is surrounded by a lovely garden in perfect Victorian style. The house has got two floors, and on each floor there are five big rooms, adorned with original furniture. Moreover, in the rooms you can also find some mannequins representing the inhabitants of the house. When I visited this place in 2009, I also enjoyed an interesting exhibition in the garden called ‘The Secret’s Out’- it was an exhibition about the testimonies of the lifelong friendship between Charlotte, Mary Taylor and Ellen Nussey.

Besides observing the letters and small objects of the three friends, you could also notice the difference of the three women’s lifestyles thanks to huge notice boards- as a matter of fact, even if, as women, they were somehow surrounded by the social regulations of the Victorian Era, they were indeed very different from each other: Mary Taylor had a revolutionary and nonconformist attitude, Charlotte had a polemic and critical attitude and Ellen Nussey had a more traditional attitude in compliance with the Victorian mentality.

Oakwell Hall is in Birstall, not so far from the Red House. It’s a majestic late Elizabethan building with a dark facade, sourrounded by marvelous gardens. Inside the house there are plenty of testimonies of the English Civil War. When Charlotte visited it with Ellen Nussey in 1840, this house was a boarding school for girls, and Charlotte’s fervid imagination turned it into Fieldhead– the most important house in Shirley. In chapter XI this very house is described as “the gray and mossy colouring communicated by time, […] the old latticed windows, the stone porch, the walls, the roof, the chimney-stacks, were rich in crayon touches and sepia lights and shades.”

Even if they are not so easy to reach, these two historic houses are really interesting places and they are surely worth visiting. In fact, being there gives you a deeper vision of the inspiring process at the core of the quite difficult drafting of Charlotte’s novel.

(All the pictures were sent to us by Professor De Leo).

Representative of the Brontë Society in Italy

Editorial consultat for the Brontë Studies in Italy

Share:
Tags:
#BS in Italy#oakwell hall#Professor Maddalena De Leo#red house#shirley#yorkshirecharlotte bronte
From the Library of the Brontës: An Article About the Places of Shirley by Maddalena De Leo Score: 0 / 5 (0votes)