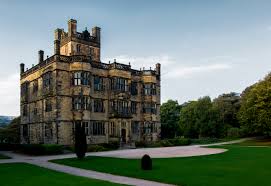 In 2007, during my stay in Haworth, I had the chance to visit the majestic aristocratic house where Charlotte Brontë was hosted in the first half of the nineteenth century. Gawthorpe Hall is a magnificent late-Elizabethan building situated in the middle of a wonderful park, near the borders of Padiham – a small village in Lancashire, not far from the most famous town of Burnley and only 40 minutes away from Haworth by car.

Surrounded by an astonishing well-cared garden, the house belonged to the Shuttleworth family for several centuries, and only around thirty years ago Lord Charles – the last descendant of the family – entrusted it to the care of the National Trust.

The building still today attracts many visitors, and beyond the wonderful rooms decorated with antique furniture, inside the house they can also admire carpets, valuable paintings and sculptures, and the particularly interesting collection of embroideries that belonged to the beloved Lady Rachel Kay-Shutterworth – as a matter of fact between the 50s and the 60s Lady Shuttleworth herself started a school that was very well-attended by girls who learnt the art of embroidery perfectly. The tiny decorations made by Lady Rachel are small masterpieces of precision and leave the visitors enraptured.

For us, Brontë lovers, Gawthorpe Hall is particularly important because Charlotte Brontë was hosted by Sir James Kay-Shuttleworth and his wife, Lady Janet, and this meeting was one of the effects of Jane Eyre

’s great success; moreover, it was actually Sir James who introduced in 1850 Charlotte Brontё to Elizabeth Gaskell, her future biographer, even if the meeting happened in a different house placed in the Lake District.

Charlotte Brontё was a guest at Gawtrhope Hall in March 1850, and then again in 1855 t

ogether with her newlywed husband Arthur Bell Nicholls, to whom Sir James offered a job at the local parish – an offer that wasn’t accepted.
Charlotte liked the house very much; thinking back to those evenings spent with the Shuttleworth, sitting in front of the big fireplace in their dark oak sitting room, she described it as ‘gray, antique, castellated and stately’. In a letter she wrote to her editor, George Smith, Charlotte recollects all the dialogues – which were actually “monologues”, since she usually listened more than she spoke – that were not so much oppressive after all.

During my visit to Gawthorpe Hall, I had the chance to linger in front of the sitting room, imagining Charlotte’s small figure sitting in a corner of that very room more than 150 years ago, filling the place with her modest presence. It’s beautiful to think that still today, this house is especially remembered by many because Charlotte Brontё lived here for a few days in two different moments of her short life.