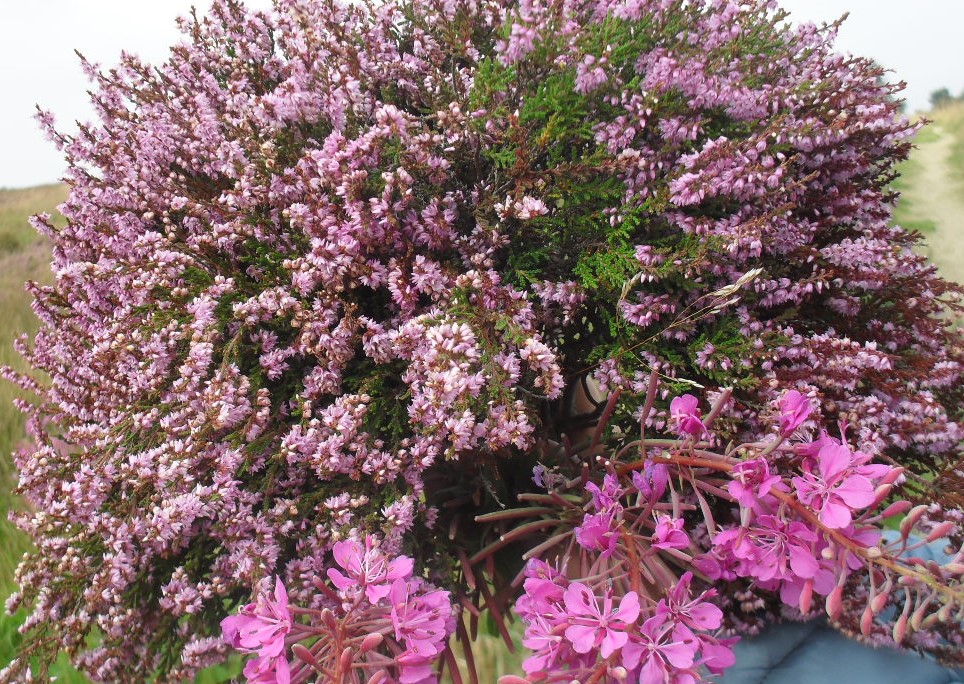 When you think of the Yorkshire moors as depicted by the Brontë sisters in their novels, the first thing that comes to your mind is the heather, the plant that grows and blooms there from the first days of August to the end of September, and changes the wilderness into an immeasurable fuchsia ocean. The plant whose flowers Emily loved so much, stands strong against the weather and its name comes from the Greek word ereiko which means “to break”. In August , it also blooms in Scotland, and its pink flowers gives to the Highlands a magical effect!

The heather, however, is not the only flower that can be found on the moors in summer. I had the chance to see many others foxgloves, epilobiums and cardoons– they are a real natural wonder and they’re all the same colour.

The foxglove (Digitalis Purpurea) is a long-stemmed inflorescence which consists of many small purplish, bell-like flowers, that suddenly come out scattered all over the green moors. Il can reach the height of one meter and a half, and it’s a poisonous plant that produces substances able to slow the heart rate down, and can be used in medicine. Its common name “foxglove” takes  origin from the word “folks-glove” because of its shape, which recalls the shape of a glove, and its colour is mainly purple in Great Britain (also the italian denomination digitale refers to the same resemblance). According to northern mithology, fairies love sleeping inside these flowers, so picking them or moving the vase where they’re planted it’s dangerous. Digitalis Purpurea should always be placed below an open window so that the fairies can go out whenever they like. Charlotte Brontë mentions this plant in the third chapter of Jane Eyre

, when the protagonist is looking for elves through its leaves, but in vain.

Another beautiful flower with many fuchsia petals that I had the chance to see on the moors is the Rosebay Willowherb (Chamaenerion augustifolium), which in Italian is called erba di Sant’Antonio or garofanino maggiore, and sometimes epilobio. It comes from an herbaceous plant with an upright stem which grows in wide and humid spaces, and it can also be used in medicine as an anti-inflammatory. The peculiar shape of its flowers with fleeting petals attracts many insects. In Italy, you can find this flowers in Stelvio National Park.

I saw this garofanino maggiore at the edge of the moors and I couldn’t help piking it up to embellish my small heather bouquet, even if it withered only a few hours later.

Not far from the Rosebay willowherb there was another fuchsia flower, a cardoon, whose presence is not a surprise at all since Haworth is not so far from Scotland, where this plant can be found everywhere. The Cardoon is a perennial plant, very spiny, which produces purple flowers similar to those of the artichoke plant.

In August and September, the alternation of green an fuchsia is so strong that it makes you forget the autumnal greyness and the blanket of snow that always covers the moors in winter.