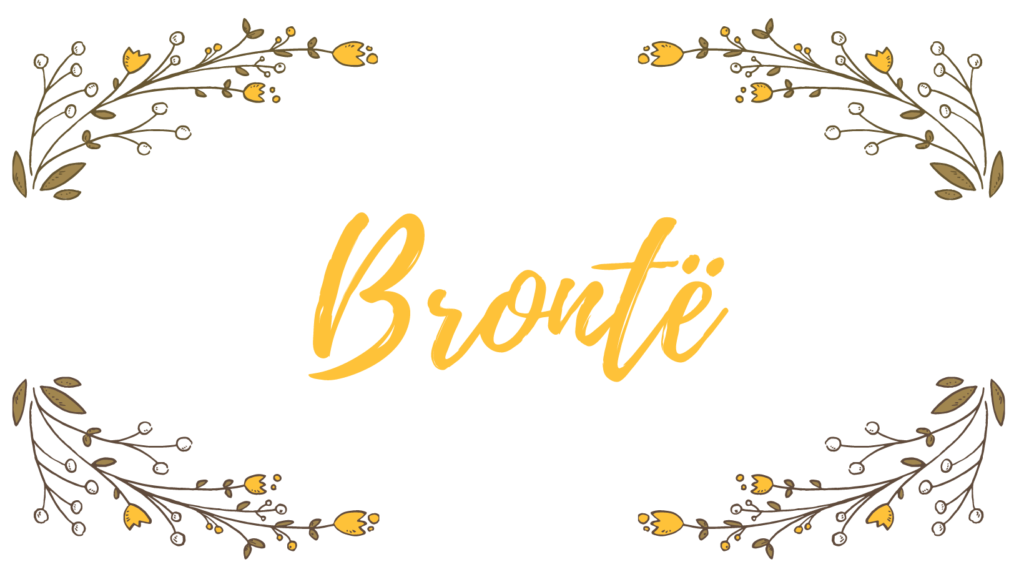 When it comes to the surname Brontë there are always a lot of interesting questions. How do you pronounce it? Why is there a diaeresis on the last vowel? Could it be possible that this surname is somehow connected with the Italian city Bronte, in Sicily? The story of one of the most important  surnames in literature is actually a very interesting one. Let’s see.

Story of the surname Brontë

The actual surname of Charlotte, Emily and Anne’s father, was not Brontë.  As a matter of fact Patrick was born in County Down, Ireland, and apparently his surname was Prunty, Brunty or O’ Prantee. We don’t know for sure, also because whenever it had to be written down on documents and registers, there were always many spelling mistakes due to Patrick’s strong Irish accent (Branty was also another version of it). So during his college years, Patrick decided to change his surname to Brontë. In order to make it sound more refined and less connected to his poor Irish origins, he changed it to the more impressive sounding ‘Brontë’.
But why is there a diaeresis on the last vowel? Well, beacuse Patrick didn’t want it to be pronounced “Bronte”, but on the contrary, he wanted the surname to sound just like the name of the Italian city of Bronte.

Brontë as the Italian city of pistachio?

Well, Brontë does actually sound exactly like the Italian city in Sicily where they produce the renowned pistachio. This part of the story is actually absolutely interesting. Apparently the name change was due to Patrick’s admiration for the Admiral Horatio Nelson, who was given the title of Duke of Bronte by the King of Naples (Nelson never went to visit Bronte, anyway). The name Bronte was just perfect- much better than Prunty, more refined and at the same time a homage to his hero. In order to be sure about the pronountiation he wanted, he added the diaeresis to the final “e”.

Needless to say- thanks to the literary masterpieces of the three Brontë sisters, this surname is today one of the most well known surnames in the world. Did you know the story behind the surname Brontë? Did you know it is somehow connected to Bronte in Sicily, where they produce the famous pistachio?

For more curiousities about the Brontës, read The Hawthorn: Barraclough’s house in Haworth.