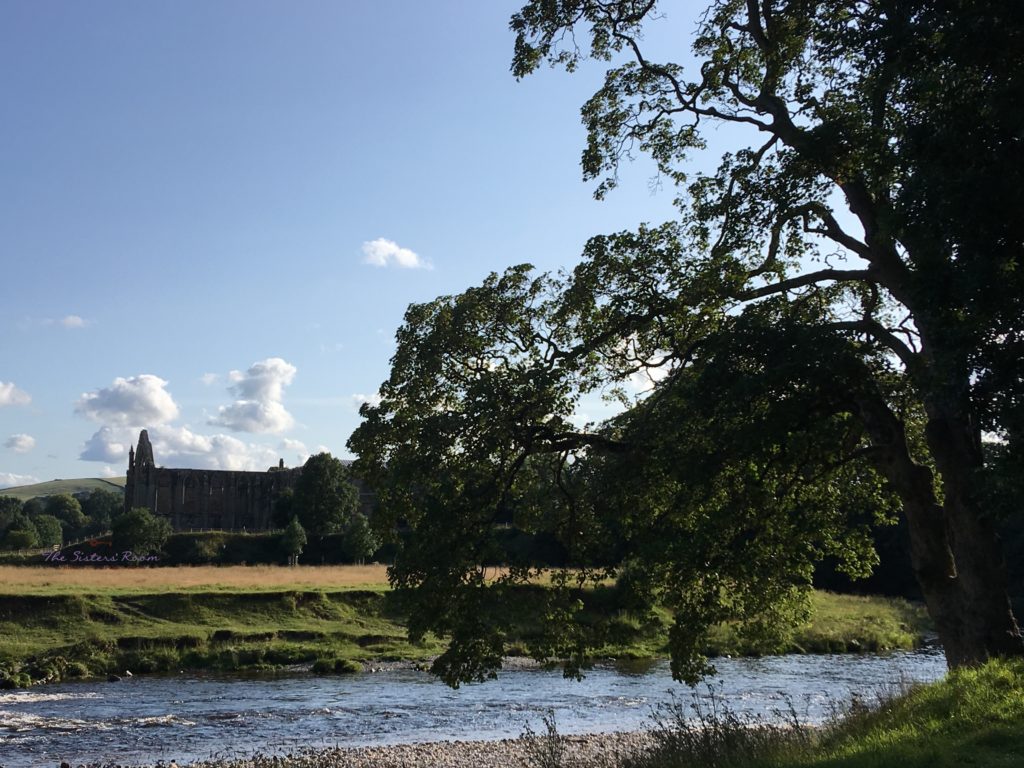 Last summer, with Selene and Serena, the creators of this blog, I had the pleasure to visit lovely Haworth, the village where the Brontë siblings lived. We wandered the moors all around the Parsonage and we also organized a trip to Bolton Abbey in North Yorkshire, about half an hour away by car from Haworth.
In the core of the green Estate you can find the Priory Church, next to the evocative and majestic ruins of a medieval Augustinian Abbey founded in 1154 and abandoned in 1539. Walking through the ruins into the amazing gothic nave without covering was such an exciting experience- not only because the whole landscape is beautiful there, but also because we knew that Charlotte Brontë and her family visited those very same ruins and those green feelds.

As a matter of fact, after some research at the library inside the Parsonage, we found out that Charlotte visited the abbey in September 1833. She was seventeen and she went there with her family and with Ellen Nussey’s. It’s thanks to Ellen’s Reminiscences that we can read so many details of the trip by coach organized by Branwell- an excursion through the moors, hills and villages, up to Bolton Abbey, on the banks of the river Wharfe.

A few months later, in May 1834, Charlotte Brontë drew a small view of the abbey- pencil on paper- that today you can find at the Parsonage Museum. In the picture there are the ruins of Bolton Abbey- the peaceful river flowing in its wider segment creates a picturesque frame, together with the thick greenery, and in particular, with the huge tree on the right. At the Summer Exhibition of the Royal Northern Society for the Encouragement of the Fine Arts, held in Leeds in 1834, they absolutely appreciated this work by Charlotte Brontë, even if it’s a small pencil drawing.

It’s probably a nocturnal view- the central part of the drawing lit by moonlight. Young Charlotte’s attention towards the details in drawing the countless small leaves of the tree is remarkable, such as her skillfull use of chiaroscuro and, furthermore, of sfumato which she used in order to better convey the background with the hills and the stone bridge damp at night because of the river. On the right you can see the poetic and huge ruins of the Priory Church- no vault even back then. The pointed arch windows are opened on the surrounding area, letting the lively nature enter the old building, abandoned already. It’s a romantic view- you can find the very essence of the English landscape in it, with both picuresque and sublime, just like in William Turner’s artwoks (1775-1851).

Charlotte actually knew that that artist from London had been to Bolton Abbey too before her- he also realized several studies from that very point of view. But it’s quite sure that Charlotte didn’t draw her view live, en plein air- she copied Edward Finden’s engraving, from “The Literary souvenir” in 1826. That image was also inspired by another artist’s work- Turner’s watercolor (1809), preserved today at the British Museum.

Turner realized his view during his first journey to Yorkshire, to Farnley Hall, as a guest of the land owner Walter Fawkes in 1808. He drew the Abbey from the northern side, exactly like Charlotte did.  Comparing the two works, though,  Turner’s view appears to have been realized from a further distance and, most importantly, during the day.
In Charlotte’s choice to portrait gothic ruins- she did the same with Kirkstall Abbey’s view- there is some kind of will of bringing a mysterious and lost past back into light. We can find here that romantic sensitivity in putting together the natural aspects, the divine ones, and those created by man.

The nature surrounding the amazing ruins of the abbey is luxuriant and lively, but also scary- as William Wordsworth wrote in his long poem The White Doe of Rylstone, written after his visit to Bolton Abbey in 1807. Walking there, in a hot afternoon in August, between the ruins and the traditional English nature was an amazing experience. The river Wharfe flowing peacefully, with its legends, after the rapids of the Strid; trying to take pictures from the same point where Charlotte observed the Abbey; everything made us feel closer to the Brontës, on a trip organized a long time ago, away from the small village of Haworth.