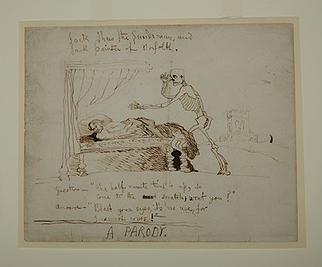 Today is the 167th anniversary of Patrick Branwell Bontё’s death; author of the Pillar Portrait and only male sibling of the Brontë family, Patrick is often considered as the “invisible” and “forgotten” brother, the one who wasted his own talent by living an infernal life and giving scandal. He died aged 31 on this day, in 1848, suffering from tuberculosis and worn out by the overuse of alcohol and opium addiction.

We learned a lot about him during our Treasure Tour session at The Parsonage Museum, we saw an ink sketch entitled A Parody, dated back to July 1848 and drawn by Branwell just a couple of months before his death. The sketch, which was probably meant to be sent to his friend Joseph Bentley Leyland along with a letter, depicts a naked dying man in a bed – supposedly Branwell himself – being challenged by Death – represented as a skeleton- to a boxing match. On the top left corner of the paper, in fact, you can read the names of two famous boxers of the time

“Jack Shaw, the Guardsman, and Jack Painter of Norfolk”; while at the bottom, there is a short dialogue:

“Question: “The half minute time is up, so Come to the scratch

Death is challenging Branwell to enter the ring but, with great sarcasm and a biting, bitter irony, he curses his enemy; there is no need to accept the challenge: Branwell is already dying. In the background you can see the bell tower of a church and a grave; that is the bell tower of the Haworth Parish Church and the grave pictured in front of it, is probably placed in the graveyard which lies between the Parsonage and the church itself. Branwell depicted the precise view he could see from Reverend Brontё’s bedroom, the very place where he spent the last days of his life. Today, the sight from the window -except for some more trees and more graves in the cemetery- is not so different from how it was in those days.

Even in the last months of his life the “forgotten brother” left indelible marks, as sharp as his pen and as biting as the irony of his own words. One could say that he wasn’t that “invisible” after all, since we find him in every Brontё novel; more than once, in fact, the Brontё sisters took inspiration from his tragic life to create aggressive, gloomy characters, or to describe strange events like a bedroom bursting into flames at night, and a sleeping man saved by a brave young woman… We can also still see Branwell between his three sisters in the Pillar Portrait, the family portrait from which he decided to remove himself by painting over his own figure a white pillar. Of Branwell’s self- portrait, just a faded “shadow” remains today, but that image is still unmistakably visible. So no, Brawell wasn’t “invisible” at all; he has always been there in his own peculiar way, influencing the lives and the imagination of each family member both with his vulnerable life and his sad death.