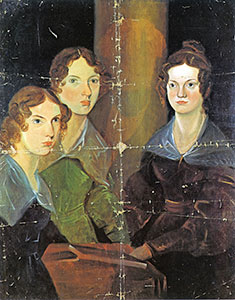 The painting tells us a lot about the colours, the features and the expressions of Anne, Emily and Charlotte – from left to right. Also known as “The Pillar Portrait” because of the presence of a white streak between the two taller figures, the painting hides a secret – looking carefully at that white pillar behind Emily and Charlotte’s back in fact, a male figure can be discerned. That figure is very likely Branwell himself, who decided to remove his own image for some reason. The painting was found folded in four parts (as the marks on the canvas show clearly) on top of a cupboard by the second wife of Charlotte Brontë’s husband, the Reverend A.B. Nicholls.

The “Pillar Portrait” is not the only family portrait the Brontёs had. Apparently, there was a previous group representation painted in 1833, of which only a fragment remains with the image of Emily’s profile. At the left side of the fragment the shoulder of a man is visible, and it is thought to be young Branwell’s shoulder.

Both the Pillar Portrait and Emily’s profile were purchased by the National Portrait Gallery of London in 1914. They are exhibited in Room 24, the Early Victorians room, together with the portraits of other famous writers like Charles Dickens, William Thackeray, Robert and Elizabeth Barret Browning.

If you are in London for the summer, you can’t miss it.

If you want to know more about Branwell’s skills as an artist read also: From Branwell’s Drawers: A Parody and Branwell Brontë and his unfinished novel – an article by Maddalena De Leo